PUBG MOBILE GAME IS BACK IN INDIA | PUBG BATTLEGROUND

PUBG MOBILE GAME IS BACK IN INDIA | PUBG BATTLEGROUND 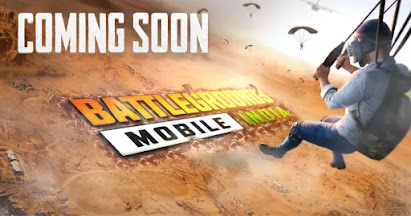 Friends, in this article today, we will talk about the PUBG mobile game that it will come back to India, but before that we should know why the PUBG mobile was closed in India.

Friends, Pubg Mobile Game was closed in India because the Indian government had left something unconnected with China and India did not want China to use the privacy of India for the benefit, so India closed 60 software of China.
One of them was the Pubg mobile game, which had caused a lot of damage to the Pubg company since the game was closed in India and this game was the most played by Indian people, so they have done a lot of projects to get Pubg back to  again in India and now Pubg Mobile India getting back.

PUBG MOBILE BACK IN INDIA

Congratulations to all of you friends, now that PUBJ Mobile has said that PUBJ is coming back to the game India, that too with a new name called Battle Ground Mobile India and it will also come on the Play Store in a few days And friends, you must be thinking that India and China are not good friends, so why is Pubg Mobile coming back in India?
Friends, the answer was this game is not a China game, it was a Korean game, but they had made this game with a company in China, but now Korea have decided they have to made a single company game for Indian people so they played Pubg game with more fun as they play before the game was closed.

Friends, I have given you a video above in which Indian Youtubers started making videos on top of the Pubg mobile game and some Youtubers know when the Pubg mobile game will come to India.
Friends, as you know, when the Pubg game was in India, the Indian YouTubers gamers was getting ahead from Pubg Mobile game and boths are Indian Youtubers and the Pubg company were benefiting from it, but after the Pubg mobile was shut down in India, after that the Indian gamers and both the company had suffered a lot of losses, so when the Pubg Mobile Game is coming back, they are very happy.
Friends, for some time, they have deleted all the videos from YouTube channel, they have removed all the posts from India Youtube channel and also from Instagram, and today put a new video on Pubg Mobile Indian YouTube Channel and there is a post on Instagram and a new post today. They want to start a brand new game in India, only then they have changed the name of the game as well.
Friends, if you have any problem in playing the video, so you can tell me about it in the comment box.

Friends, I have given you a video above in which there is a trailer of Pubg Mobile and this trailer was uploaded on the channel by Pubg itself to 30 January 2021 and yet they had not launched the game in India as Pubg was renamed in India.
But it was not being launched, but now when it has been registered under the new name and now it seems that in few days the game will come on the play store.
In this trailer, Dynamo is shown who is one of the big names of Indian gamers and he is also waiting for a long time, we think that many Indian gamers will know when the game will be launched in India Official.
Friends, if you have any problem in playing the video, so you can tell me about it in the comment box.
Friends if you have any problem with any of my Article then you can tell me about it inside the comment box and thanks for reading this Article.
Tags-
HOW PUBG MOBILE COME BACK IN INDIA,
WHICH DATE PUBG GAME COMING IN INDAI,
PUBG BATTLEGROUND INDIA MOBILE,
PUBG MOBILE GAME BACK IN INDIA.
Tags:
GAMES india KIDS Mobiles PUBG Software Technology