Friends, in this article today, we will talk about the penny wise, where he has come from and who is he and why does this bother the children and why is he a clown. 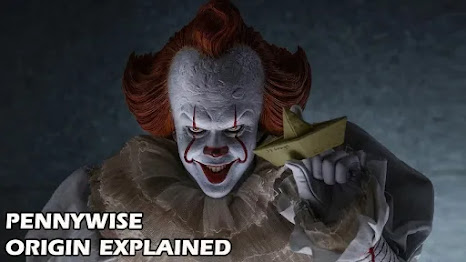 Friends Penny Wise is a joker who is a character of the movie IT and in this movie he is a joker and he is a ghost and that bothers all the children of the city and eats their souls for live.

WHY HE IS A CLOWN

Friends, there was something else earlier, but when the fair was held in the city, he would see that all the children of the city were very afraid of the Joker, so he too became a clown so that he would gain even more strength when the children were afraid from him and he can change himself in whatever form he wants, so sometimes he would take the form of the family member of the people.

WHERE HE HAS COME FROM

Friends, Penny Wise is the ghost of hell and he lived in that city for a long time and he sleeps for 27 years, then when he feels hungry then he eats food for 2 years and he has been doing the same thing for many years.

WHY DOESN'T ANYONE KNOW ABOUT THE PENNY WISE

Friends Foil Wise was first written in Navel in 1986,
Friends, a drama has been made in India on this, which came on Zee TV, whose name was WOH.

Friends, I have given you a video above, in which he have also told about the story of the penny wise and the origin of Pennywise and Who is Pennywise and where he came from, then you can also know about the penny wise by watching this video.
Friends, this video is in Hindi, so I have written for you about the penny wise so that you do not have any problem and if you like this video, then you can become a part of their YouTube family.
ComicVerse
Friends, if you have any problem while playing the video or if you have any problem with this article of mine, then you can tell me about it in the comment box and you can also tell me about which article you want to read about.
Thanks For Reading This Article.
Tags-
WHO IS PENNYWISE,
STORY OF IT GHOST,
REAL STORY OF PENNYWISE,
STORY EXPALINED OF IT JOKER,
IT MOVIE JOKER STORY,
PENNYWISE THE DANCING CLOWN.
Tags:
KIDS Movies STORY