REAL STORY OF MOTU AND PATLU

Friends, in this article today, we will talk about where did Motu and Patlu cartoon begin?
Motu Patlu was the comic book of Motu and Patlu before cartoon, which started in 1969.
Created by Pran Kumar Sharma 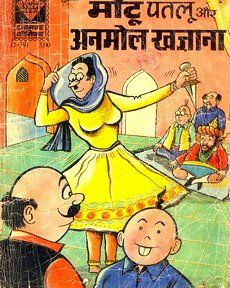 He has also created a comic of Chacha Chhudarya, which has to very famous comic series in India and after  Motu Patlu comic include in lotpot comic books, if you ever read a comic book, then you must read this comic book.

The Motu that he had was as Faty as his name and he loved Samosas and he used to do very well and whenever he eat Samosas, his mind used to go on and on and he would get a lot of strength after eating Samosas.

Now we will talk about Patlu and Patlu was thin like his name but he used to help Motu as he was sensible of Patlu and helped Motu all the time.
Motu wore red colored clothes and Patlu was yellow colored
And these two are the popular characters of this drama because they have started the show on top of it and there are some people who are very good characters of this drama, in which they have some names like Samosa Bala and Chingam Sir, Ghasitaram, John Don Bade Bhaiya.

Many years after the Motu Patlu comic, he made a cartoon of Motu Patlu, in which all the things same as the comic.
First episode date: 16 October 2012
First episode name : John Banega Don
Network: Nickelodeon
Voices of:
Saurav Chakraborty; Omi Sharma; Sankalp; Brian D. Costa; Rajah; Renu Sharda
Friends, if you do not like to read, then you can see their real story by watching the video or you can speak the success story of the cartoon.
So you look and tell me in the comment box how you thought this video.

Friends, I give you a video that is the first episode of Motu Aur Patlu cartoon-
In this episode too, Motu and Patlu have to stop Jon because Jon is a don and keeps stealing and to stop him, Motu and Patlu come forward and then they stop Jon.
Only you will know all about this episode by watching this episode so please go and watch the video.
MOTU PATLU DRAWING
DRAWING
Friends, if you like drawing, then you can also see drawing by clicking on the drawing. Drawing of Motu Patlu.
Friends, if you liked this article, then go to the comment box and comment on a good comment and tell me how you felt this article, and if you have any problem then you can tell me about the problem in the comment box.
Tags-
MOTU AUR PATLU COMICS,
MOTU PATLU HISTORY,
MOTU PATLU KI AASALI KAHANI,
MOTU PATLU KI SUCCESS STROY,
MOTU PATLU CARTOON,
MOTU PATLU STORY.
Tags:
CARTOON india KIDS MOTU PATLU

How To Draw Shinchan Drawing For Kids | Shinchan Color Drawing